The European Uyghur Institute was created by the Oghouz Association of Uyghur students enrolled in French universities. For a decade, this association was the only Uyghur organization leading activities in France. During this time, many Uyghur students graduated from the University and started working, funding families and fully engaging in their host society. This dynamic has led the Oghouz Association to funding an Institute which represents Uyghurs both in France and in the rest of Europe. Its main goal is to train a new generation of Uyghurs deeply attached to the values and principles of gender equality, secularity and higher education. Through an approach that promotes cultural activities and higher education, the Institute aims at nurturing this new generation’s awareness of its own culture as well as its attachment to Europe.

Among the 10,000 Uyghur people currently living in Europe, around 10% are based in France. They constitute a rather new European community, which has recently started to grow bigger. It is therefore essential to support a secular structure which is able to help them integrate and contribute to the cultural development of Europe. The European Uyghur Institute strives to achieve these goals through the cooperation of Uyghurs living in all parts of Europe. As most of them are still in their thirties and have recently finished their studies in their host country, the Institute will keep the functions of the former Oghouz Association:

Moreover, the Institute has acquired new functions such as:

As we are committed supporters of associative values, we want the Institute to be a place of representation and debate for secular, feminist and humanist Uyghurs of all Europe. It seems essential to us that Uyghurs can bring their own cultural diversity to European societies as they integrate into them. Therefore, we refuse to associate the Institute to any form of religious or political institution which stand against these values. Instead, we decided to ask for the help of European citizens and residents, as independence is indeed a fundamental value of the Uyghur Institute of Europe.

Why an Uyghur Institute?

There are around 10 000 Uyghurs living in Europe today, the majority of which live in Germany, the Netherlands, Sweden, Norway and Finland. Most of the 800-1000 Uyghurs living in France come from the Uyghur Region while a small minority come from the Turkic speaking countries of Central Asia. It is a young community not only because they recently settled down in France (in the beginning of the 2000’s) but also because of their average age is around 30-35. 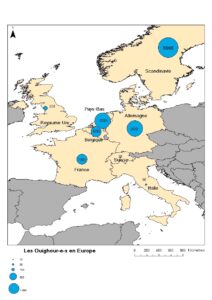 The Oghouz Association was for a long time the only associative structure to bring together Uyghur students in the country. After most of them graduated, the Association was no longer relevant to the situation of Uyghurs living in France as most have begun to work and many have already started a family. On the other hand, a small amount of people recently came to seek asylum in European countries such as France, Sweden and Germany. The Uyghur Institute of Europe was born in 2019 in this context of need, a new structure adapted to this rapidly changing environment.

For more than ten years, the Oghouz Association has brought to light and promoted Uyghur culture in French society and academic community through the organization of conferences, workshops and festivals. The European Uyghur Institute will carry this work forward by organizing more cultural and academic events in order to promote Uyghur studies in Europe.

While the majority of Uyghurs living in Japan and the United States are working as scientists and academics who are highly integrated in intellectual spheres of their host societies, Uyghurs living in Europe are mostly recently graduated students who have just integrated the labor market. It is thus essential for them to have a structure that doesn’t take side either in politics or in religious matters in order to encourage them to integrate their host societies and to preserve their own language and secular culture. These are the reasons why it is both essential and urgent to support the European Uyghur Institute!